Arjun Suravaram movie was supposed to release in December 2018, but it got delayed due to VFX work till Summer 2019 and the producers further delayed the movie due to release date issues.

Movie finally released on 29th November and team is happy that it collected a gross of Rs. 21 crores Worldwide in two weeks. Movie held a success meet at Hyderabad and Raj Tharun graced the event as special guest.

Santhosh directed the film and it is a remake of his Tamil movie, Kanithan. The director thanked audiences for making his movie, a success as they worked hard to see that it will release.

Nikhil thanked producers for believing in the film and then attributed the success to Megastar Chiranjeevi. He said that the movie got more attention because of the star's presence at pre-release event. He called Megastar as the god-send blessing for their film.

He thanked audiences and media for making their film such a success even though they couldn't release it on-time.

Raj Tharun congratulated the entire team and said that everyone deserved this success and he is happy for Nikhil.

Can Anupama Get A Break With This Film?

Sanjay Dutt Hospitalised Due To Breathlessness

Blast From The Past: Deepika Flaunts Her Perfect Abs!

Even CBI Should Take Permission From Mumbai Police 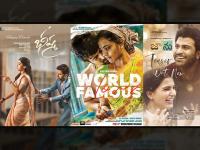