Young hero Naga Shaurya is currently working on 'Ashwathama' which is getting produced under 'Ira Creations' which is his own banner. The team officially announced the release date of the film recently though a poster.


The film will be released on January 31st, 2020. Naga Shaurya is seen in full action-mode in the poster holding a metal sphere. He seemed all beefed-up and is expected to flex his muscles during the fight sequences. The motion poster brought good buzz around the film.


Directed by debutant Ramana Teja, this action flick will have Mehreen Pirzada playing the female lead.
Download our app

Disha's Father Accuses Media Of False News On her Daughter!

Record Breaking Getups By Star Hero In His Upcoming Film!

Mythri To Make A Multistarrer With Chiru!

Telugu Anchor Spills The Beans On Her Marriage

All Set For The Grand Wedding Of Rana

This Character Artist Is A Stunner 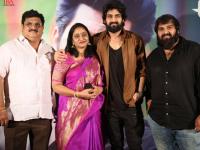