Director Bobby aka KS Ravindra started his career as a writer and became a director with Power film.

He immediately got a chance to direct, Pawan Kalyan in the film, Sardar Gabbar Singh. Movie shoot was completed in a hurry in 3 months prior to release.

Pawan Kalyan wrote story and screenplay of the film too. Movie released after a two year gap from previous Kalyan film and fans had huge expectations.

But the film became a huge disaster. Many commented that Bobby should have handled the movie better and others supported him saying that Pawan Kalyan should have given more time to deliver goods.

Well, Bobby who is waiting for the release of his next film, Venky Mama expressed no regrets in making Sardar Gabbar Singh.

He shared that he is happy that he got a chance to work with Pawan Kalyan, his favourite actor and he has many memories with him as they travelled two years closely, making the film.

He also said that he was chosen by his idol to direct the film and he did not make it on his own. So, he doesn't feel any disappointment about being part of it, he commented. Venky Mama is releasing on 13th December.

Trolls Made Premam Beauty Stay Away From Mollywood

This Is How Much Industry Lost In The Past 4 Months!

BJP Leader Makes Sensational Comments On Sushant And His Manager 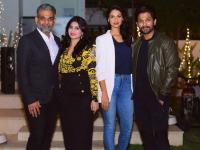