It's Etela vs Gangula in Karimnagar

For years, Etela has been the most popular BC face of the TRS and has been with the party right from its inception. He has emerged as the to-go man for the BC communities across the state. But, now things are a changing. Gangula Kamalakar too is a BC and he has been given the BC welfare department. This means every BC leader who matters has to go him for any work. Etela feels that Gangula is eating into his support base as more and more Dalit leaders are flocking to Gangula to get their works done. A race of sorts is taking place in Karimnagar as to who attracts more BCs towards himself.

Jagan's move to abolish Council is not appreciable: KK

National Parties Joined Their Hands To Defeat The Regional Party

India's first underwater metro to be completed in 2022

Politicians Under Detention Should Be Released: Stalin

On this day Nirbhaya convicts will be hanged 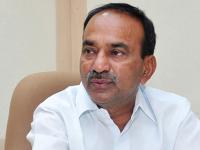 In politics, there will be only suicides no deaths: Etela