Payal Rajput Says I Love U To This Actor!

Well, don't jump on us and say that we are trying to sensationalise a joke. We understand that Payal Rajput was not serious but she expressed her admiration towards the actor.

At Venky Mama pre-release event, Payal Rajput thanked Venkatesh for giving her an opportunity to act with him, so soon.

She also thanked Bobby, the director and Naga Chaitanya, as well. She later said that she admires the professionalism shown by each and everyone, who worked for the film.

After that Payal said I Love you to Venkatesh and fans started shouting slogans. She immediately said that she loves each one of them, as well.

Raashi Khanna also said that she loves Naga Chaitanya and Venkatesh for being themselves. Payal expressed her fondness towards Venky on her instagram profile many times and she just expressed it on public platform at this event.

The actress is hoping for a big success with Venky Mama, releasing on 13th December, to cement her place as a leading lady. 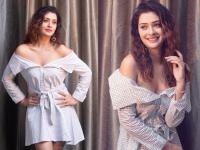