Legendary music composer Keeravani's son Kaala Bhairava who established himself as a good singer is being introduced as a music composer, with the film.

Sri Simha, second son of MM Keeravani is getting introduced as an actor with this film. The teaser talks about how, over sleeping can be a serious issue.

Kumbakarna in Ramayana used to have such a problem where he slept for days together and it was hard to wake him up.

Using that theme, young director Ritesh Rana seems to have come up with a good script that engages us.

Cinematography, music in the trailer are good and even editing is stylish. Let's see how the young team will pull off 2 hours long film. 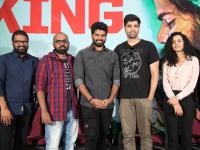