Can Mahesh please the audience with his dance?

Superstar Mahesh Babu has a lot of positives as a hero but dancing is definitely not one of them. Right from the starting of his career, Mahesh was never considered a good dancer. Some of his dance moves have been heavily trolled on social media. But sources claim that he is going to change this notion with 'Sarileru Neekevvaru'.

The first single, 'Mind Block' was released a few days back and it good response from the audience. Devi Sri Prasad delivered some mass and foot-tapping numbers for this film and reports say that Mahesh's moves will surely floor his fans. Apparently, Sekhar master choreographed some crazy steps and the superstar will be rocking the dance floor.

'Sarileru Neekevvaru' is directed by Anil Ravipudi and produced by Anil Sunkara along with Dil Raju. Kannada beauty Rashmika Mandanna is playing the love interest of Mahesh Babu while Vijayashanti is playing an important role. The film is expected to hit the screens on 11th January 2020.

"Sarileru Neekevvaru - $12 and under"

Can GA Continue Their Success Run With Akkineni Hero?

Trailer Talk: Father In The First Part, Daughter In The Sequel! 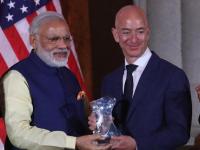 Why Modi Is Not Giving Appointment To Amazon CEO?