It has been a year since Shah Rukh Khan's 'Zero' released and he didn't accept any other film. He is going through a rough patch in his career right now as none of his films succeeded at the box-office in the last 5 years. He took some time off recently and flew to Los Angeles along with his wife Gauri Khan.

His trip photos came out on social media and looks like he had a great vacation along with his family. Posting his pictures, SRK wrote, "Finally the California sun is out....it's time for the Pool...maybe should dress right for it now at my @airbnb villa in LA." Also, some fans spotted him there and king Khan obliged to their request for selfies too.
His son Aryan Khan is doing a film making course in the UK while his daughter Suhana Khan is doing the same course in New York. SRK is in talks with Raj & DK for his next film. Let us wait and see how that turns out.

Mehreen needs Aswatthama to be success more than others!

Can Pelli Choopulu producer turn lucky for his son too?

Why is Allu Arjun not promoting his AVPL in other languages?

Nithiin is not just Bheeshma but he will be Maharshi too

Is Jaanu team not confident enough? 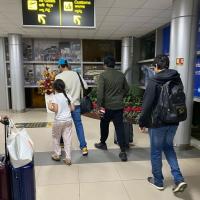