Ravi Teja is going through a tough phase from the past few months and he pinned all his hopes on 'Disco Raja'. Directed by VI Anand, this film created interest with its different posters. The much-awaited teaser of this film is out now and let us have a look at it.

The teaser looks quite intriguing and promises that Ravi Teja and team are offering something different this time. It starts off with Ravi Teja walking with liquor in his hand and mouthing the dialogue, "I'm done with this f***ing crap!". The film revolves around some illegal scientific experiment done on the protagonist. Ravi Teja stepped out of his comfort zone with this flick and the last shot is sure to make his fans happy. His look too is quite unique.

The visuals look very rich and artwork is brilliant. Thaman's background music stands as the biggest highlight of this teaser. Nabha Natesh and Payal Rajput were not seen in this teaser while Tanya Hope makes her presence felt. 'Disco Raja' is produced by Rajini Talluri under SRT Entertainments. Sai Sriram is the cinematographer while Naveen Nooli edited this flick. This experimental movie is hitting the screens on January 24th 2020.

Is Samantha all set make her small screen debut?

Prabhas considering his lucky date to release his next!

Pic Talk: 'Jaguar' hero turns into an athlete for his next! 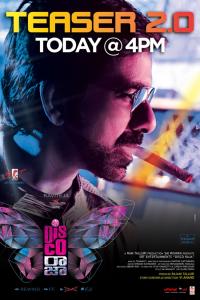