Can We See Trivikram In Full Form Again?

Hailed as the wizard of the words, Trivikram Srinivas is one director every hero dreams to work with. His films have huge craze among the public and especially in the family audience as he is known for his witty punches and heart-touching emotions. But lately, we have seen him losing a bit of his magical touch.

He is often facing accusations about copying stories and scenes. Also, he lost his Midas touch when he is writing comedy sequences and dialogues. His recent work pales in comparison to his punches in films like 'Nuvve Nuvve', 'Athadu', 'Manmadhudu', 'Jalsa' and others. Also, 'Agnyathavaasi' damaged his stardom to a large extent and 'Aravinda Sametha' did not completely repair it.

So, the success of 'Ala Vaikunthapuramlo' is crucial for Trivikram too just like it is for Bunny. Hope he is in full flow for this film.

Beauty Trying Her Hand At Gymnastics

Is 'Solo Brathuke So Better' Team Making The Right Decision?

Photostory: What Are These Powerful Star Wives Coming Up With?

Actress Dares To Do This For A Regional Love Story

Tamannaah And Nabha To Star Alongside Nithiin

Actress And Her Efforts To Go Away From Responsibilities 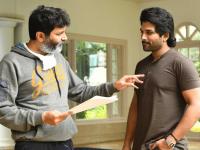 Can Trivikram Reach The Expectations?
×