Talented actress Tapsee Pannu is getting on the news frequently these days for her remarks and comments on various topics. Following Kangana Ranaut, she is criticizing her colleagues these days quite often and is very vocal about her opinions.

Recently on the show 'No Filter Neha', she commented on hot actress Urvashi Rautela's fashion sense. She told that Urvasi has a great and perfect body but wished she had good dressing sense thereby taking a dig at her glamour show at film events. These comments from Tapsee became a hot topic among showbiz circles.

It is quite common to speak about other actresses but criticizing them like this was never seen before. We need to wait and see how Urvasi responds to Tapsee's remarks on her.

Also, she revealed some interesting things about her 'Judwaa 2' co-star Jacqueline Fernandez and her 'Manmarziyan' co-star Vicky Kaushal. Tapsee quoted them as the worst co-stars she ever worked with in a sarcastic way.
Download our app 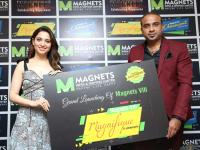