A Newly-Married Woman Allegedly Tried To Kill Her Husband

A newly-married woman allegedly tried to kill her husband by giving him a glass of buttermilk laced with poison at Madanantapuram in Maddikera Mandal of Kurnool district on Monday.

On Sunday, Lingamaiah came to his in-laws' house to take his wife with him to his village. After having dinner, around 10 pm. Nagamani allegedly mixed poison in a glass of milk which she gave to her husband. Her husband drank the milk and collapsed soon after. An unconscious Lingamaiah was immediately rushed to the local government hospital by other family members. His condition is reported to be stable.

According to local police, Lingamaiah of Jonnagiri married Nagamani of Madananthapuram village about a week ago. The wedding was carried out without the consent of the girl, who was unhappy with her parents choice

This Is How Modi, Rajnath Choreographed Leh Visit

This Is What Arun Jaitley's Children Are Doing These Days

This Telugu Man Is Giving Sleepless Nights To Ahmed Patel

Why Modi Met President At Rastrapathi Bhavan, Amid Tense Situation? 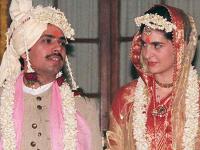