Police deployed near the TSRTC convenor Ashwathama Reddy's house to prevent him from heading to Indira Park. Ashwathama said that he will continue the hunger strike although if the police arrested him. He further clarified that the strike will be continued until the government calls the RTC unions for talks.


Meanwhile, the police also tightened the security at RTC crossroads, Bus Bhavan, VST, Ramnagar crossroads, Vidyanagar. Barricades were set up in these areas and the vehicles are also being checked. The workers will take part in the Sadak Bandh and stall the Hyderabad - Vijayawada highway on November 19.


Ashwathama Reddy said that he already sought an appointment to meet Governor Tamilisai Soundararajan with the bereaved families of RTC workers who committed suicides and died of depression recently.
Download our app 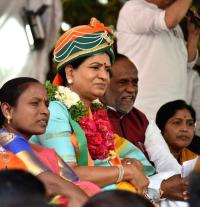