Ravishing beauty Vani Kapoor recently scored her first blockbuster with 'War'. The film minted more than 300 crores at the box-office and she is overjoyed by the film's success. She is known for her trendy fashion sense and her Instagram account stands as the proof.


She often stuns everybody with her bold and revealing outfits. She recently posted a picture of herself in a bold pink crop top with a deep neck cut. She looked completely hot in that pic revealing her cleavage. This picture seems to have hurt the religious feelings of some people. Her pink top seems to be having 'Ram' printed all over it. They have asked her to delete those pictures immediately from all her social media accounts. Having god's name on such revealing outfit reportedly was found offensive by many.


Not wanting to get into any controversy, Vani immediately deleted those pictures. Well! This is not the first time, a Bollywood actress became a topic of controversy because of her dressing.
Download our app

Jagapathi Babu To Star In This Ambitious Remake

Dubbing Films Ready To Release As Soon As Theatres Reopen!

Koratala Siva To Work With These Producers Again! 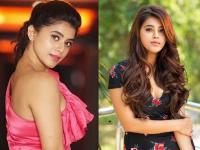