Actorrn Vishal is back onscreen again with 'Action'. Termed as a sleek action rnflick, it gained good buzz with its stylish trailers and posters. rnTamanna is the female lead and this Sundar C directorial has hit the rnscreens this 15th November. Let us get into the complete details.

Sonrn of state's Chief Minister, Subhash (Vishal) is an army officer and rnarrives home to spend time with his family. During this time, his fatherrn announces his elder brother as his political heir and while they are rnarranging a big meeting, a tragic bomb blast takes place and kills many rnpeople including Subhash's would-be wife (Aishwarya Lekshmi). The next rnday, his elder brother commits suicide by hanging himself to the roof. rnDevastated by this, Subhash decides to find out the people behind and rnhow far it takes him to seek revenge forms the rest of the story.

'Action'rn as the title suggests is filled with a lot of hard action sequences. rnThe film kicks-off with a massive chase out of nowhere and then goes rnback to the beginning of the plot. The major highlight of the film is rnits high-octane thrilling action scenes. Action lovers are in for a goodrn treat. The basic premise of the film looks interesting and it is rnnarrated with good flow throughout. What stands out the most is the 15 rnminutes chase scene before the interval. It is superbly choreographed rnand well picturized by the team. The family emotions in the first half rnworked out well which lays a solid foundation for the protagonist's rnmotive for the rest of the movie. The screenplay during the first half rnis racy and director Sundar who made horror flicks like 'Chandrakala', rn'Kalavathi' and comic caper like 'Maga Maharaju' earlier manages to comern up with a full-length action film with a decent budget.

Like rnmost big hero films, 'Action' too suffers from over-commercialization. rnDespite having a good plot and interesting screenplay, the director rntried to infuse comedy scenes which were completely unnecessary. It not rnonly spoiled the mood and flow of the film but also increased the rnruntime. Also, he dedicated three songs for three heroines in this rnserious film which acted as hindrances to the proceedings. The logic rngoes for a toss at many places like hero crosses country borders with norn difficulty and he easily steals thousands of crores from a bank accountrn as if he is a professional hacker. The main villain character is rndesigned poorly and he doesn't show the menace but acts loudly instead. rnThe last 20 minutes of the film is a letdown is it seems to be inspired rnby films like 'Baby' and recent spy thrillers and offers nothing new or rninteresting.

After a racy first half, the film turns slow in the rnlatter part with its sluggish narration. Also, 150 minutes of runtime isrn excessive for an action flick and it should have been trimmed by at rnleast 15 minutes.

Vishalrn is at his best doing action sequences like crushing the baddies or rnjumping from the roofs. He did not have any special scenes to showcase rnhis acting prowess and he looked serious most of the time. Tamanna did rnher part of supporting the hero well and she appeared smoking hot in thern romantic song.

Aishwarya Lekshmi impresses in her brief role and Akanksha Puri is good as the assassin and looked very glamorous.

Kabirrn Singh fails to impress with his villainy act while Yogi Babu doesn't rntickle your funny bones. The rest of the cast included mostly the Tamil rnactors and they were okay.

'Action'rn is quite good on the technical front. The cinematography is stunning asrn Dudley ably captured rich locations like London, Istanbul and others. rnSongs from Hiphop Tamizha doesn't register but he elevates the film withrn his background score. The artwork is fantastic while the CG appears a rnbit tacky as certain stunts look weird onscreen. On the whole, they did arn good job considering the budget constraints. Editing could have been rnbetter as certain comedy and dragging scenes could have been chopped rnoff. The production values from Vishal are grand.

Sundar C rncomes up with an interesting plot and a cent screenplay. His direction rntoo was impressive as he handled action and emotional sequences quite rnwell. Had he not stuffed lame comedy scenes for commercial purposes and rnhandled the second half in a better manner, the film could have reached rnthe next level.
Bottom Line: Good 'Action' Flick But Nothing Great!

Trivikram To Try A New Genre For NTR's Film!

Arnab, The News Prostitute A Film By RGV! 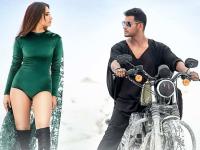