Jayalalitha's biopic gets a handsome MGR!

There were a lot of talks over the biopic of Tamil Nadu's ex-chief minister and legendary actress, late Jayalalitha. Several directors are gearing up to make films on her and off them, Vijay's directorial is grabbing everyone's attention.


Talented Hindi actress Kangana Ranaut is going to play the titular role in this film and seasoned actor Aravind Swamy is doing the important role of legendary MGR. Looks like the makers have done a test shoot on the 'Roja' actor before filming and that pictures are out now. Aravind Swamy became busy these days playing crucial roles in big films and his first look in this biopic is attracting everyone's attention.


He looks completely handsome with a clean shave and fits perfectly to the look. This multi-lingual film is produced by Vishnu Induri and it is expected to showcase the entire journey of Jayalalitha.

Star Actress Locked For Gopichand's Next

Are All Small Movies Meant To Have An OTT Release?

Is The Fate Of American Theatres In Jeopardy? 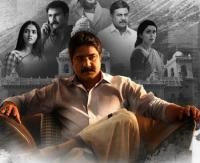