Pooja Hegde is on a spree of shooting at unexplored places. She shot for her film Ala Vaikuntapurramuloo's song Samajavaragamana at Paris with Lido dancers for the first time for any South Indian film.


Now, she explored AlUla, a very less known place in Saudi Arabia. For magazine, Travel+Leisure, she took on this assignment and shot at almost virgin locations of Arabia.


The magazine took her photoshoot as cover page material and even have 10 other lesser known places to explore in Middle East.


AlUla is publicised as Best-Kept Secret of Arabia by the magazine and they got Pooja looking stunning in these locations in white like a dolled up angel.


Well, Prabhas20 titled as Jaan for now and two more films are in her kitty and we wonder where she will shoot next, which could again turn out to be a First for her to shoot and first for the World or for any film from South India or even for Indian films.
Download our app 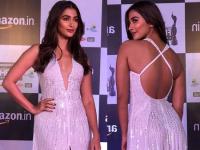