The makers of Nandamuri Balakrishna's upcoming film 'Ruler' released three posters officially till now and all of them project the massy side of their hero. While one poster shows him holding a bloody sword, he is seen as an aggressive cop in the other two posters.


Now, the team released another poster revealing the cool and soft side of their protagonist. This seems to be a still from a romantic song where Balakrishna is looking trendy with a floral shirt, blue denim and sneakers. There was news about Balakrishna shedding nearly 15 kilos for this film earlier and that can be seen in this poster. He appears quite young and slim.


The team of 'Ruler' is currently in Munnar shooting a melody song between Balayya and Vedhika. They revealed that the teaser will be out soon and the film will hit the screens on 20th December. It is directed by KS Ravikumar and produced by C. Kalyan
Download our app 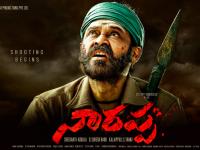