This is a victory of faith over facts, says Asaduddin Owaisi

Hyderabad MP, AIMIM Party President, Asaduddin Owaisi said that he is not happy with the verdict of Ayodhya dispute. Supreme Court is 'indeed supreme, but not infallible,' he quoted former Chief Justice of India JS Verma.

Owaisi repeated the quoted a couple of times, while addressing the media over the verdict given by the apex court.

The five-judge Constitution bench of the Supreme Court has delivered the verdict in a unanimous ruling. The ruling has cleared the route of constructing the Ram Mandir. The Court ordered that the Sunni Waqf Board should be given an alternate land of five acres in Ayodhya for a mosque.

'This is a victory of faith over facts,' Owaisi added.

Cricket Is Not An Exemption For Racism: Chris Gayle

Five Succumbed In AP Following The Consumption Of Surgical Spirit 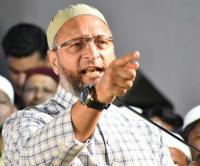 Owaisi Says Take Money From Congress But Vote Him
×