The first look poster of 'Thaagithe Tandaana' is out now and the poster suggests that the film is going to be a fun-filled crime drama. '24 Kisses' fame Adith Arun plays the lead character while comedians Sapthagiri and Madhu will be seen as his friends.

The first look poster gives you a hint of the story. The 'Don't Drink & Think' caption on one of the boxes explain that the film is about how the three friends got into trouble because of the decision a deed they did while being drunk. The poster shows the three main sitting down in fear as a man sits in the chair in front of them holding a gun. On the whole, the first look is quite interesting.

'Thaagithe Tandaana' is directed by Srinath Badineni and produced by V. Mahesh and Vinod Jangapally. Music is composed by Shravan Bharadwaj while P. Bal Reddy is the director of photography. 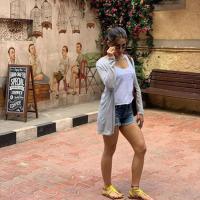 This Is Why The US Airport Officials Gave A Suspicious Look to Sara!
×