Kamal Hassan announced that Indian-2 is his last film and he wishesld for it to be as grand as it can be.

Shankar took time to lock the script and brought in a huge cast adding Siddharth and Rakul Preet Singh to the existing Kajal, Kamal Hassan.

Movie will have Kamal playing 90 year old Sensthipathi, who is still ready to fight against corruption after a huge statement he made by killing his son, in the first one.

In these leaked pics, we can see how Kamal will look in the film. Horse Riding might be done by a stunt double as the mask is clearly visible.

The shoot is going on at Bhopal and Peter Hein is choreographing stunts. Get Ready for a massy commercial film from Kamal after 22 years.

Comedian-Turned-Actor To Direct A Marathi Remake?

Will He Turn Out To Be Bigg Boss Season 4 Winner?

Big News: Here Comes Prabhas As 'Salaar', The Most Violent! 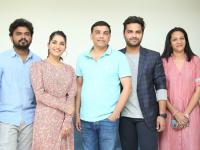