Ileana D'Cruz became a huge sensation in Telugu way back in 2006 with Devadasu and Pokiri. She became much more popular than Pooja Hegde, today and became part of many big films.

She migrated to Bollywood in 2012 and since, then stayed there. She worked in Raid with Ajay Devgn and now, she has Pagal Panti coming up with John Abraham, Anil Kapoor in the direction of Anees Bazmee.

She has been away from films for a year concentrating on her personal life and she recently broke up with Andrew Kneebone, a photographer and decided to take up films again.

Her break-up was said to be a result of her close relationship with a senior star hero but she said many times that she doesn't react to baseless rumours.

Later, she suggested that she cannot enjoy sex without love or an attachment. She rubbished the news reports suggesting that she said to enjoy sex there is no need for love.

She also said that she never felt sex is a workout and she encourages people to fall in love before performing the act as it involves two souls than just bodies.

She talked about this and her career in a show with Shibani Dandekar. Her Pagalpanti is releasing on 22nd November and she is expecting a hit at box office as her return to Telugu films, with Amar Akbar Anthony met with disastrous result.

Exclusive: I Have No Problem Working On OTT Platform â€“ Surabhi 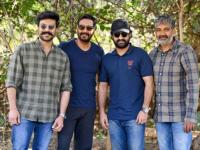 'RRR' To Kick-Start With A Fistfight!
×