Pic Talk: Suhana Slays It With Her Looks!

Shah Rukh Khan's young princess Suhana Khan is considered a star in the making. Thanks to her father's following, Suhana became the focus of paparazzi from a young age. She is currently busy studying filmmaking in New York.

She often keeps the media buzzing with her trendy pictures and her recent picture is no exception. She is having a great time in New York with her friends at a theme party as it looks. She flaunts her perfect abs in a cropped tanked top and sunlight kissing her makes it even more appealing. Her sassy looks are making the followers on social media droll over.

Looks like Suhana surely is preparing the ground for a grand entry in Bollywood by posting glamorous photos, interacting with fans and posing to the camera without inhibitions.
Download our app

Trivikram To Try A New Genre For NTR's Film!

Arnab, The News Prostitute A Film By RGV! 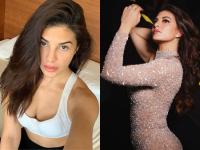