All isn't well between President Naresh and Vice President Rajasekhar in the Movie Artist Association (MAA). Rajasekhar Camp got ready to issue a show-cause notice to Naresh by holding a meeting with the Office Bearers. Naresh's Counsel questioned how could Rajasekhar Camp hold the General Body Meeting without the consent of the court.

As per Rajasekhar Camp, 'The meeting scheduled to happen on October 20th wasn't a General Body Meeting. This was meant to know the views of the members on certain issues. It's been 6 months since the MAA Elections happened, yet no fund raising event was conducted so far. What about Rs 5.5 crore fund in MAA Treasury? Previous MAA Presidents raised fund through events. In contrast, Naresh has been using the money meant for MAA Office construction to meet the expenditure. President wasn't attending any of the meeting since few months'.

MAA Chief Advisor Krishnam Raju: 'This Meeting is meant to discuss about the issues. Signatures won't be sought from any of the members. Since 25 years, MAA has been run in a manner that everyone appreciated it. I wish such a high standards will be maintained in future as well'.

War of words between Members during the MAA Meeting on Sunday led to a ruckus. For sometime, Nobody knows what's happening because of the heated arguments between both the camps. MAA Treasurer Paruchuri Gopalakrishna walked out of the meeting with tears in his eyes. Few other members staged a walkout in protest against their opposite camp.

Pan India Star's Next Film To Give Visual Treat

Actress All Set To Resurrect Her Career

Will This Sports Star Biopic Workout?

What Will Puri And Akhil Do Now? 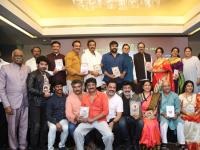