Any other Filmmaker might have preferred wearing a suit even if its for the first time when his or her film receives the honour of screening at the World-famous Royal Albert Hall in London. Surprising everyone, SS Rajamouli opted for a traditional avatar for the screening of 'Baahubali: The Beginning'. He arrived in a kurta and dhoti for having a once in a life time experience.

Actually, The new attire of Rajamouli has left many Telugu People stunned. Why because, People got used to see this Ace Filmmaker in a casual avatar again & again. The attempt clearly shows the intention of Rajamouli to remain like an Indian wherever he might be. He made the World realize that a guy from India has made a franchise which is appreciated by people across the World. That's the statement of the Genius!

Prabhas looked dapper in a well-fitted suit, Anushka mesmerized by appearing gorgeous in a saree and Rana made himself comfortable in the ethnic wear. Overall, All of them appeared perfect in the choices made by them for the big occasion. 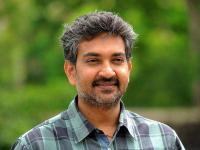