South Africa Opener Dean Elgar invited the backlash by making disrespectful comment on Indian Hotels and Food. Speaking to a web-portal regarding the ongoing Test Series, Elgar admitted South Africa Tour of India is very challenging as it stretches an individual as a person and as a cricketer. He added, 'You will get to know a lot as a person when you visit small places where the hotels mayn't be as good and you face challenges on the field. Its always a good learning curve coming to India'.

Netizens came down heavily on Dean Elgar for complaining about Indian Hotels and Food. A Twitter User told Dean Elgar should be reminded that Cape Town Hotel gave Indian Cricketers only 2 minutes time to take shower due to water shortage.

Several Netizens wondered if the Indian Hotels were responsible for South Africa's poor performance in the ongoing tour. They mocked the Visitors saying this Team could have defeated India 3-0 had if they were provided best hotels.

India has already claimed the series by winning 2 Test Matches played so far. In the 3rd Test, India is in a strong position with a score of 223 for 3 in the first innings.

Another Record In AP's Kitty

IT Gaint Has 74 Crorepati Employees

Vijay Mallya Will Be Brought Back To India Soon: Govt Sources

Telangana Intermediate Board Opts To Change The Syllabus

Indian Techie Gets Paid By Apple For Detecting A Major Bug 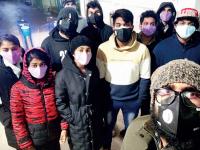