Every finance minister is afraid of the reaction from his wife to his budget proposals. One though being a lady Finance Minister Nirmala Sitharaman would not face such problems. But, Nirmala's husband Parakala Prabhakar has proved one wrong. He has come up with a strident critique of his wife's handing of the finances of the country.

In a scathing attack on the Modi government, he said that the country was lapsing into financial downturn and that the Modi government is not yet ready to accept this. He said the BJP has no economic policy of its own. What it is doing is only criticising the Nehruvian policies. This criticism, he said, was purely due to ideological reasons, He said the only way the BJP could salvage the situation was to follow the policies of PV Narasimha Rao and Manmohan Singh.

But wife Nirmala doesn't seem to be on the same page with her hubby. Though she did not directly respond to Parakala Prabhakar's criticism, she said the Modi Government was in the forefront of promoting and nurturing reforms. She said the Modi government has brought in fundamental reforms such as GST, Aadhar and Ujwala Yojana. Let's see how this tussle between the wife and the husband gets resolved.

Things slipping out of Chandrababu's hands? 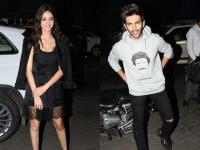