Trailer Talk: A Ode To 'Rangeela'!

Coming from the school of Ram Gopal Varma, director Agastya Manju definitely seems to know how to present a women sensuously. The trailer of his film 'Beautiful' was released by RGV.

Stated as 'An Ode To Rangeela' in the trailer, this film surely follows the exact story line of 'Rangeela' where heroine suddenly becomes rich which leaves the couple in turbulence. The film is termed as 'A Ram Gopal Varma's Dream' in the end.

'Rangeela' was a trendsetter and Varma's bold taking in glamorously presenting Urmila raised a lot of eye brows at that time. After that, he couldn't come up with another film like it. His protege Agastya took a leaf from his mentor and filled the trailer with steamy kisses and shots that project the beauty of Nina Ganguly from different angles. The eroticism is quite high and Nina made sure to keep the temperatures soaring high throughout the trailer.

The release date of this flick is yet to be announced.

What's The Next Project Of Anil Ravipudi?

Another Famous Dance Master Turns Into A Director!

Ulaganayakan And Manmadhudu Come Together For That Film! 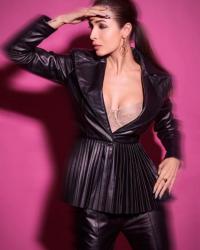