We have already seen a bunch of directors who repeated their heroines in so many movies. Sampath Nandi is also one such director who has been working with same heroine ever since his debut.

Now, as per the latest reports, Sampath is all set to kickstart his next and is in plans to repeat his heroine again. It seems like Gopichand signed a project with Sampath Nandi and Tamannah is on board for the project too.

On the other hand, Tamannaah will be next seen in Megastar Chiranjeevi's 'Sye Raa' where she plays the role of a temple dancer named Lakshmi! 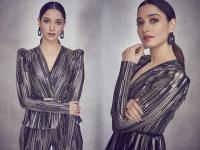