Vijay Seems To Be The Only Hope For Raashi

Heroines who share screen space with Vijay Deverakonda stay in the limelight for at least from the formal launch till a week post theatrical release either because of controversies or lip-locks or link-ups rumours. This happened in the case of Rashmika Mandanna, Shalini Pandey and Priyanka Jawalkar. That could be one of the reasons why mid-range Actresses are more than happy to work with the 'Arjun Reddy' Star.

Raashi Khanna is hoping to get all the attention with her first flick with Vijay Deverakonda titled as 'World Famous Lover'. This Beauty gave an impression that she entered top league with 'Jai Lava Kusa' but the failure of 'Srinivasa Kalyanam' and being adamant on remuneration did a lot of damage to her career. She is now hoping to make it big with the Vijay Deverakonda-starrer.

In fact, Raashi Khanna have four other projects in the pipeline (Venky Mama,  Shaitan Ka Bachcha, Sanga Thamizhan, Kadaisi Vivasayi). She, however, pinned all her hopes on 'World Famous Lover' directed by Kranthi Madhav of 'Malli Malli Idi Rani Roju' fame. Why because, Raashi is aware of spike in the graph of Rashmika Mandanna and Shalini Pandey after working with Vijay Deverakonda. 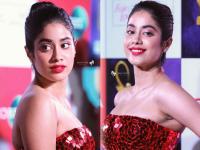