Prabhas To Go Back To Old Look!

Prabhas looks have changed over years but he looked his best in Baahubali-1, Darling, Mirchi and Chatrapathi. Munna, Yogi, Billa, Bujjigadu did not have him in consistent looks but they became popular with his fans.

Everyone unanimously accepts that Mirchi and Darling are his best onscreen looks in his film career, even Varsham can't come close to the way, he was shown in those two films.

Saaho is his worst possible look and the actor took note of the criticism. He sent Jaan script back to the writers room for good mix of universal elements and Telugu Nativity.

He asked Jill fame Radhakrishna, to develop different scripts if necessary for Hindi and Telugu versions of the film. He doesn't want to repeat, Saaho mistakes.

He is taking ayurvedic treatment to clear toxins from blood and body. He will start shooting once his look is set and when the film goes on floor, it will be shot non-stop for Dasara, 2020 release.

He and Pooja Hegde will get look tests again. Prabhas is also looking to grow hair like he did for Darling and give his die-hard fans a treat with Jaan as they supported him unconditionally, for Saaho. 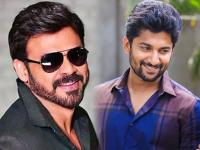 Trivikram Plans For A Venky-Nani Multi-starrer!
×