Despite getting negative reviews and mixed talk from the audience, Prabhas starrer Saaho has collected a gross of about Rs. 430 crores at the box office. It the northern belt itself, the film collected a total nett. of Rs. 154 crores. This proves the pan-Indian stardom of Prabhas, which helped his film to earn big irrespective of its word of mouth.

This is now inspiring the other Telugu heroes to test expand their market across the country. Already, NTR and Ram Charan are going to do that with RRR. Now, Mahesh Babu is planning to do a film with KGF director Prasanth Neel. This project will go on floors in the second half of 2020.

On the other side, Vijay Deverakonda is going often to Mumbai these days and maintaining a close rapport with Karan Johar hinting that he is making his Hindi debut under the production of Karan. Even Allu Arjun is making plans for his debut as the actor is having talks with Bollywood director Nikhil Advani and he has also asked Icon's director Venu Sriram to come up with a script which will appeal to the audience across the country. 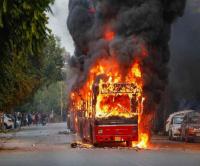 Will Tollywood Stars Maintain Their Silence On CAA And CAB?
×