Pre-Release Event of 'Sye Raa' was scheduled to happen at the LB Stadium on September 18th. Pawan Kalyan, SS Rajamouli and VV Vinayak are expected to grace this event.

If the speculations doing rounds are to be believed, The event has been postponed to 22nd of September but the theatrical trailer will be unveiled on 18th as per the earlier plan.

Uncertainty over the release of 'Sye Raa' on October 2nd continues because of the clash with 'War' starring Hrithik Roshan and Tiger Shroff. There is a possibility of delaying the release for the sake of Hindi Version. If 'War' and 'Sye Raa' releases on the same day, How many North Indians will be preferring to watch the flick starring Tollywood Megastar? Ram Charan can't afford to take such a huge risk after investing close to Rs 300 crore.

In rest of the territories, 'Sye Raa' can't get a better release date than October 2nd. Maximum revenue can be generated in South India during the Dussehra Season. 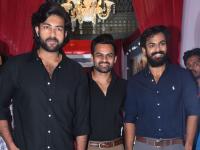