When Nani and Vikram K Kumar team up, You don't expect a regular commercial flick in such a combination. Casting, Posters and Promos of 'Gang Leader' gave an impressive its a unique film containing ample humour and revenge drama. Let's see what this movie have to offer...

Pencil Parthasarathy (Nani), a Crime Novel Specialist, was approached by a Gang led by Lakshmi for help to take revenge on Dev (Karthikeya). In what way these five Females are connected to Dev? Why Pencil Parthasarathy gets ready to help the Ladies? How did Dev react to the revenge tactics of the Gang? Watch 'Gang Leader' in theaters to find answers!

Nani is an Actor who is capable of moulding himself to make him look perfect in any character. He is simply superb as Pencil Parthasarathy. The end result of 'Gang Leader' would have been far better had if Vikram Kumar continued the same meter for this character till the very end. Still, Nani entertains with his impeccable comic timing. Viewers connect with his character instantly because of his look, mannerisms and performance.

Priyanka Arun Mohan is impressive in her debut flick. Though she didn't have much scope to perform, This Debutante left a mark of her own with her expressions and cuteness.

Lakshmi excelled in the role of Saraswathi whether its comedy or emotional scene. Even Saranya, Teenage Girl and the Child Artist played their roles to perfection. As Dev, Karthikeya creates a good impact. One gets the feeling that he is perfect for the role of Antagonist. Vennela Kishore tickles the funny bone. Priyadarsi is fine.

Songs composed by Anirudh Ravichander are refreshing. You get the feeling that Makers should have included few more songs in the movie. Anirudh showed what he is capable of doing with Background Score. The energy which he brings through his music is marvelous. You could see the expertise of Cinematographer Mirosla Kuba in every frame. Especially, He deserves all the praise for the Interval Bang Shot. Dialogues penned by Venkat are good. Nothing to complain about Production Values maintained by Mythri Movie Makers. You expect logic in the story or scenes when someone like Vikram K Kumar is the Director but he disappoints this time. He banked heavily on the funny narration and twists in the screenplay. You could see his brilliance at times but too many loose ends hamper the overall impact. 'Gang Leader' isn't on par with the high standards set by Vikram Kumar.

You don't find the Characters convincing, there mayn't be Logic in the story and an in-depth analysis makes you aware of many loopholes. Still, You get entertained throughout the film. Nani's 'Gang Leader' is one such flick which guarantees time-pass. Although it have humour and thrills, Cinematic and Convenient Writing worked against the movie. You may find as many cons as that of pros but there is no dearth for entertainment.

Vikram K Kumar is known to be one of the few intelligent filmmakers down South. Even Today, Movie Lovers appreciate how he pulled off complex screenplays in '13B', 'Manam' and '24' so convincingly. Sadly, He didn't bother about logic while making 'Gang Leader' but succeeded in entertaining and thrilling the movie buffs. Storyline of 'Gang Leader' appears silly. Viewers don't get convinced that injustice happened to the Gang Members who are seeking revenge. The best of Pencil Parthasarathy role was shown in the teaser and trailer itself. Those who expect more from this character get disappointed. This character does nothing in the first 40 minutes though Nani entertains with his comic timing.

'Gang Leader' gets on to the track with the entry of Karthikeya who played Dev. Shades in this character raises the curiosity of the viewers. Investigation of Pencil and his Gang to collect the details about Villain is thrilling though its not too convincing. Interval Bang remains as the highlight of First Half. This is what shows the range and calibre of Vikram Kumar.

Vikram Kumar gains command on Screenplay at the Interval Bang and designed the Second Half in a much more interesting manner. Cat & Mouse Play between Hero and Villain is interesting to watch. Scenes that offer thrill to the viewers in the Second Half maintains good tempo. Vikram Kumar-mark at times make you respect him more for the calibre he have. Vennela Kishore is brilliant once again and the scenes featuring him have come out so well. Pre-Climax is the highlight of the film. One gets the impression that Climax is abrupt. Nevertheless, Twists, Humour and Thrills in the Second Half make people step out of the theaters with a positive feeling. 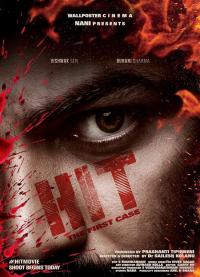 'Gang Leader' casts 'FalaknumaDas' in his next
×