Star Heroes have been coming forward to appreciate KT Rama Rao one after the other even since the IT Minister launched a new campaign to motivate public to go for cleanliness drive to prevent viral fevers and dengue. KTR inspected the stagnant water points in Pragathi Bhavan as they are the breeding grounds for mosquitoes. He not only shared those pictures on his social media handle but also gave a call to the public.

Prabhas was the first Star Hero to applaud the efforts of Minister KTR to address the crisis with a mass movement. And now, Even Mahesh Babu came forward to support the good initiative taken by the Telangana Minister. 'Dengue & viral fever has become an epidemic in the city. Do an extra bit in keeping your premises & neighborhood free from water stagnation. Be vigilant & take care of yourself, Hyderabad,' he wrote.

Probably, This is for the first time Mahesh Babu has followed Prabhas. There were no complaints from fans about this development what-so-ever and that's a good sign.

Both Prabhas and Mahesh Babu are the two Stars who are capable of crossing language barriers. Imagine how the multi-starrer in this combination is going to be like..!

Pooja And Rashmika: Go To Girls For Big Films In Tollywood

This Hero Not At All Happy With Director's Success!

Nithin Bids Adieu To Bachelor Life With A Blockbuster!

Naga Shaurya, Venky And A Car. What Happened?

Hyderabad Is The Safest city For Women: Sai Pallavi 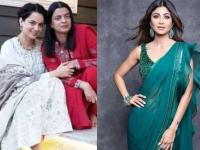