Anushka Sharma went to Caribbean Islands with husband Virat Kohli during Indian tour of West Indies. She posted some candid clicks from the trip.

Now, the couple seems to have taken off to unsolicited location on earth for a long deserved Holiday as Indian cricket season 2019-20 begin with South Africa coming to India in few days.

T20I's are going to start and Indian team has been announced too. MS Dhoni seems to have extended his two months rest period and will he be in the team for ODIs is to be seen.

Meanwhile, Anushka Sharma and Virat Kohli are spending some quality time with each other. These new clicks are from their beach holiday and Anushka looks like 1000 Watt bright bulb in the bikini, doesn't she?

Mani Sharma Seems To Be Showing Path to Juniors Again!

I Rejected 50 Scripts Till Now: Rashmika

Did Producers Doubt Vijayawada As Not Right Place For SSMB Event?

Anasuya To Appear In A Negative Role For Vijay! 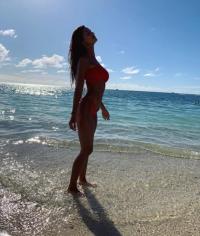