ISRO Chairperson Dr Kailasavadivoo Sivan won the hearts of Indians with the reply he offered to the question in an interview to Sun TV. To the query 'As a Tamilian who attained such a big position, What does he wants to say to the people from Tamil Nadu', This is how he responded: 'First of all, I am an Indian. I joined ISRO as an Indian. This is an organisation where people from all regions and languages contribute but I am grateful to my brothers who celebrate Me'.

The respect people have for K Sivan has only increased after he presented the national identity first. ISRO Chief was at the receiving end of praises from all over the nation.

A Netizen hailing from Bihar wrote, 'Which state Dr.Sivan belongs to doesn't affect Me, I am proud of him like every Indian..he is our national hero'.

Another Netizen wrote, 'This statement from ISRO Chief K Sivan is something I wish every Indian thought. I see so many thumping their chests to claim superiority of their regional identity or ridiculing others & forget that without India they will have no identity'.

K Sivan graduated from Madras Institute of Technology in aeronautical engineering in 1980. He joined ISRO in 1982 and has been on National Duty since the past 38 years.
Download our app

Bajrang Dal Calls For Protest Outside Jagan's Residence In Hyderabad

Gautam Gambhir Slams Dhoni For Batting At No. 7

Centre Reveals The List Of Countries PM Modi Visited Since 2015

How Can Chandrababu Claim Himself As Hindu: Kodali Nani 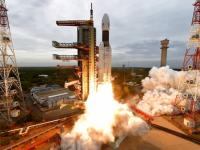