Ilaya Thalapathy Vijay is one of the star heroes in Kollywood film industry. After treating the movie lovers and fans with back to back action films, the star hero changed his track by signing a film called Bigil in which he will be seen as the coach of a female football team. Looks like Vijay is coming up with a solid content oriented movie just like how Ajith did with Nerkonda Paarvai.

Bigil is currently in the post-production stage and Vijay already shifted his focus on to another movie that will begin right after Bigil.

Tentatively termed as Thalapathy64, a formal announcement on the film's crew is out on the social media yesterday. The regular shoot of the movie will kick-start from October this year and the makers scheduled the movie's release during April next year.

Produced by Xavier Britto, Anirudh Ravichander will compose the music for this prestigious project. Lokesh Kanagaraj is the director of the movie.
Download our app

Tollywood Awaits The Biggest Multi-starer Film Ever Made!

Take A Look At Alia's Slick And Suave New Office! 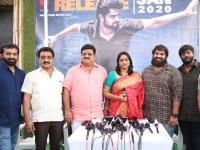