Team India have every reason to relax, rejuvenate and celebrate after winning all the matches played so far during the ongoing West Indies Tour. Indian Cricketers and Support Staff had a beach party at Jolly Beach in Antigua ahead of the Test Series against West Indies.

While sharing the shirtless photograph of the Teammates and Support Staff, Virat Kohli wrote: 'Stunning day at the beach with the boys'.

This is for the first time ever, Team India Cricketers & Support Staff made such an appearance. You could see Virat Kohli, Rohit Sharma, Ajinkya Rahane, Ishant Sharma, Mayank Agarwal, Rishabh Pant, KL Rahul and Jasprit Bumrah in the shirtless avatars.

Team India will be playing two Test Matches in West Indies before returning to the home nation in the first week of September. Victory in West Indies is a matter of prestige for No.1 ranked Test-playing Nation India as World Test Championship has already begun from August 1st, 2019.
Download our app

Covid-19 Does Not Affect Taste Buds 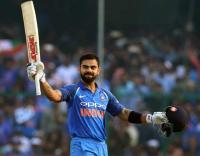