Director Bheemineni Srinivasa Rao is all set to remake the Tamil super hit film 'Kanaa' in Telugu as 'Kousalya Krishnamurthy'.

Aishwarya Rajesh who played the lead role in the original version is going to reprise her role in the Telugu version as well. Rajendra Prasad and Sivakarthikeyan are also playing crucial roles in this sports drama. The trailer theatrical trailer of the Telugu version got released today and is going viral on the internet. The trailer hinted that the movie is going to revolve around Kousalya Krishnamurthy and how dream of becoming a cricketer turns as a reality. We can say that the makers have created a good impression on the audience with the trailer.

KA Vallabha is backing this project in which CVL Narasimha Rao, Vennela Kishore etc are playing crucial roles. Dhibu Ninan Thomas is comosing tunes for this flick.
Download our app

NTR To Become The Voice Of Vijay in 'Master'!

Anasuya to Shock us all! 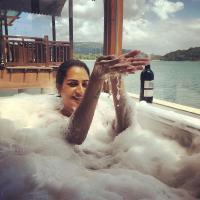