Kajal Aggarwal hardly gives a chance for the critics to write her off. She keeps making headlines for all the good reasons irrespective of hits & flops and one of the very few Actresses capable of going against the tide at will. After disasters like 'Sita' and 'Ranarangam', Kajal have at least 5 films in the pipeline. 'Queen' remake 'Paris Paris' is awaiting for the release. She is currently shooting for Kamal-Shankar's 'Indian 2' and #Suriya39. 'Awe 2' and 'Call Center' will go on floors very soon. Could you believe that she is still one of her most busiest Actresses in India? It's been over 12 Years since her debut!

Latest Photo Shoot Scans of Kajal Aggarwal are enough to make her millions of admirers jump in delight. Jaw-Dropping Poses of the 'Magadheera' Beauty in see-through outfit are hard to ignore. She is a rare combination of Beauty, Elegance, Talent and Hardwork. Kajal is capable of extending her film career as long as she wants to face the camera...Any Doubts!

A genuine super hit for this production house finally!

Can 'Jaanu' impress the audience?

KTR praises Thaman for his 'Samajavaragamana'!

Is Mahesh being clouded from the real scenario? 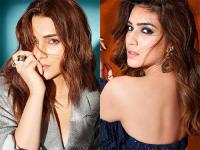