In Talk: Shortage Of TDP Scarfs!

TDP set a benchmark when it comes to the organizational structure of a political party. Even Today, Political Analysts applaud Chandrababu Naidu for the systematic manner in which he runs the party. It appears like corporate style whether if it's holding tele-conferences or salaries to those holding party posts or maintaining coordination. Such a political party is now facing shortage of 'scarfs'.

Chandrababu Naidu attended a party programme in Vijayawada recently. Scrafs used in this meeting by the Leaders were printed for using them in a particular constituency and they weren't the official scarfs of TDP. That is why we get to see Gudiwada Constituency branding on them.

In 2019 Elections, Devineni Nehru's Son Avinash was fielded in Gudiwada Constituency by TDP. Telugu Desam Candidate splurged so much of money for campaign material including the specially designed scarfs for Gudiwada Constituency. The other day, Chandrababu Naidu was found wearing this scarf around his neck at a meeting in Vijayawada. Isn't that looking so odd? What made it even worse is the speculation doing rounds about the possibility of Devineni Avinash ditching TDP to join YCP anytime soon. 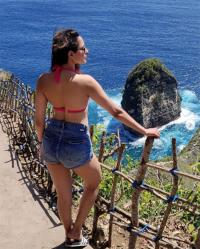