Both Puri And Vijay Deny Any New Project!

May be someone wants JanaGanaMana to be made with another hero and they are planting such rumours in the hope of them coming true, we can never say. But using that title gives rise for enough suspicion.

Puri Jagannath took final risk of his career in the hope that it will pay and Ismart Shankar paid big time for him & Ram.

As he is basking in the success, he has been asked about his next and he said that he wanted to see what Ismart Shankar result will be and then approach a hero with his ideas.

He denied that he ever met Vijay Devarakonda for a story and said he did not even write a full draft script for JanaGanaMana.

Vijay Devarakonda too said the same.  He clarified that the news stories are rumors and he is in talks with Koratala Siva but not with Puri Jagannath.

He said that he may do a film with Koratala Siva in immediate future if they both agree on a story. He also said that if ever Puri Jagannath has a script for him, he is all ears but he is too busy at this moment! 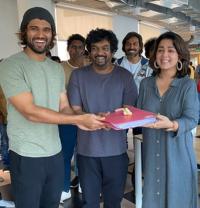