Samantha Looking For Some Family Time?

Samantha Akkineni is the next biggest female star in TFI after Anushka. She is looking to become a big star in Tamil too but Nayantara is still going strong.

Now, the actress with Oh Baby delivered such a hit that producers are flocking at her door step to get her dates.

But the actress wants to hear scripts and then only commit to the films. Recently, she decided to take some time off and spend with her family, it seems.

Since marriage, Samantha and Naga Chaitanya have been busy with multiple projects. Samantha doesn't want to miss out on the simple wife pleasures that only she can enjoy in early stages of marriage.

So, she decided to do only films she agreed and then take rest for few months, it seems. Naga Chaitanya on the other hand increased the number of projects and he could be busy till 2021, with multiple films.

Priyanka Chopra Revealed Her Aim In An Interview

What Will Trivikram Do This Time?

Allu Arjun Races Ahead Of Mahesh In Hyderabad!

Mahesh Doesn't Have Anything To Add For Those Details?

Is It The Best Decision Taken In Mahesh's Entire Career? Really?

Rajamouli To Continue Working With That Kannada Star?

Will Pooja Hegde Get Same Image In Hindi Too?

Prabhas Fans Should Thank This Legend! 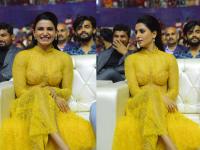