It is known that South beauty Amala Paul has recently revealed that he has a special someone in her life. Though she is not thinking about marriage at the moment, she is madly in love with that person. Recently, in another interview, she has revealed more details about him.

''No matter how much we work hard, we should always get a feeling that we have someone waiting for us and my boyfriend has made me feel like that. He even resigned from his job and joined a small part time work for me. He always stays with me and looks after me'' said Amala Paul. ''I was supposed to act naked in a scene in 'Aadai (Aame in Telugu) movie. At that time, I only thought about making my body slim. I was thinking about my body but haven't thought if I can really do it or not. In that matter, my boyfriend has supported me'' added Amala Paul.

It is known that Amala Paul earlier married director AL Vijay but they got divorced in 2017. Reacting on it, Ambala indirectly stated that she was brought up as a strong independent girl which made her to get out of some personal problems on her own. 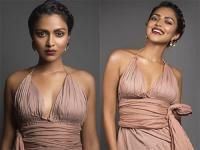