Kesineni Nani continued to embarrass the TDP Leadership be it intentionally or unintentionally. The tweets he placed on Sunday morning had particularly irked Nara Lokesh more than anyone else.

Here are the sensational tweets:

'Those who can't get 4 votes have been bagging 4 posts and the one's who can't read/write 4 words have been placing Tweets'.

'Until Yesterday, He held the feet of Chandrababu Naidu. From Tomorrow, It's going be the feet of Vijay Sai Reddy. Feet is the same, only the persons change!!!â€™.

There was a gap of 5 hours between the first and second tweet. Those who had seen the first tweet in the morning wondered if the Vijayawada MP has targeted Party Supremo's Son. Only after he placed second tweet, A lot of people could understand that those comments were targeted at Party MLA Buddha Venkanna.

RTI Filed To Know Whether PM Modi Is An Indian Citizen

Is This Man Behind BJP And Jana Sena Alliance?

Are The Differences Between The Two Brothers Benefit TRS Party?

PK - A Political Freelancer Without Character!

Municipal Polls To Be Crucial For KTR?

Pawan To Get A New Role In BJP? 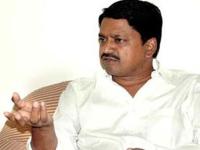