Kangana Ranaut's spat with a Journalist at the press meet of her upcoming flick 'Judgementall Hai Kya' kept taking many shocking twists n turns. Entertainment Journalist Guild imposed a ban on the 'Manikarnika' Star for disrespecting the Journalist.

Following which, Kangana Ranaut released two videos targeting the Journalists and she has only added fuel to the fire instead of issuing an apology. In one of the videos, She said: 'I beg to you please ban me, because I don't want you guys to make money out of me. It's the biggest favour you can do for me'.

In the footage, Kangana accused a section of media of attacking country's pride and integrity by spreading false rumours and treacherous views. 'They are anti-nationals and all sell out, yet no punishment inspite of posing a threat,' she says.

The Actress feels some Journalists have no work to do yet they call themselves Journalists. 'If I call myself an actor, I should have some work. These Journos comes to the press meets for free food. All of a sudden, They have formed a guild, that isn't even recognised, to ban Me. Even Rs 50 to 60 is enough to buy them out,' she comments.

On the other hand, Kangana's Lawyer Rizwan Siddiqui had served a legal notice to Entertainment Journalist Guild for announcing a ban on the Actress. In the notice, Journalists were accused of having criminal intentions and ulterior motives.
Download our app 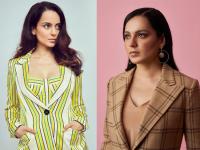