Is Kajal Looking To Pay "Gurudakshina"?

First film producers normally look for young directors or people with more knowledge and experience in Industry, so that they can also learn the production structure.

Kajal Aggarwal is turning a producer and she seems to be paying back a debt to Teja, whom she sees as her Guru.

She is introduced by Teja with Lakshmi Kalyanam in Telugu almost 15 years ago. She got chances in Chandamama and Magadheera, which made her the sensation and she became a successful actress.

Teja again came to her rescue when all her films were failing with a strong character in Nene Raju Nene Mantri, which saved her from sticking to special songs in films, after Janatha Garage.

Well, for her first production she is discussing with Teja but the director is an uncertain to believe completely. Recently, he proved that with Sita, but Kajal believes that her Guru just needs someone to believe in him.

Mahesh Urges His Fans Who Survived Corona To Donate Plasma!

Surekha Vani Plans A Surprise For Her Daughter!

Ismart Director To Pen A Book 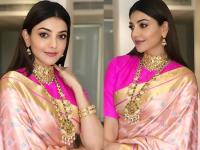