Why Are Middle Class People In Amaravati Very Happy?

Ever since YS Jagan Mohan Reddy became the Chief Minister of Andhra Pradesh, the land prices in and around Amaravati have come down. While this is a very bad news to the big-ticket realtors, who bought the lands at throwaway prices and then formed ?a cartel to jack up prices exorbitantly, this is definitely a development that is welcomed by the common man who wanted to own a piece of land in this area.

Ever since Amaravati was declared the capital, there was a realty boom of unprecedented kind. Lands that weren't worth even Rs 10 lakh per acre, have begun selling at several crores per acre. Even small chunks were converted into apartments, villas and others. But, the bubble suddenly burst when Jagan got elected. Jagan, who has always opposed acquisition of farm land for the construction of capital, became CM and the prices have began having a free fall. Interestingly Jagan has not made any statement on the issue. But, speculations are fuelling a price fall. Though there are no indications of the capital being shifted anywhere in the near future, the prices have started falling down. The realtors stopped buying new lands as a result of which, the lands that were sold for Rs 30000 per sq yd, are now being sold for less than Rs 20000. The per acre price also has come down from Rs 1.75 crore to Rs 75 lakh.

But, all this has made the middle class happy because, the land prices have come down and have been brought back to affordable rates. So, they are all thanking Jagan for bringing down the land rates.
Download our app 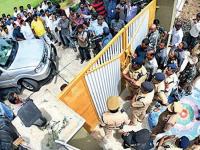