Celebrities had actively participated in social media campaigns such as #IceBucketChallenge, #SwachhBharatChallenge & #KiKiChallenge. And now, #ReadingIsGoodChallenge is the trending topic on the social media.

Tollywood Celebrities have been taking up this New Challenge one after the other. None other than Amala Akkineni accepted the challenge thrown to her by Ram Prasad. She even pledged to read the book 'Stories At Work'.

Amala has nominated none other than Samantha, Upasana and Sumanth for the #ReadingIsGoodChallenge. None of the three accepted the challenge so far but they would certainly take the challenge seriously. #JustBePatient!

Most of the Film Celebrities have been bookworms. They spend most of the time during shot breaks reading a book of their choice. So, Expect several Celebrities to accept this new challenge.

Actress Inspires With Her Fitness Goals

Yet Another Bollywood Actor Tested Positive For Corona

Bigg Boss Girl All Set To Star In Megastar Film

Actress Impresses With Her Service Yet Again!

Chiru Not Satisfied With Sujeeth? 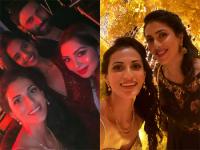